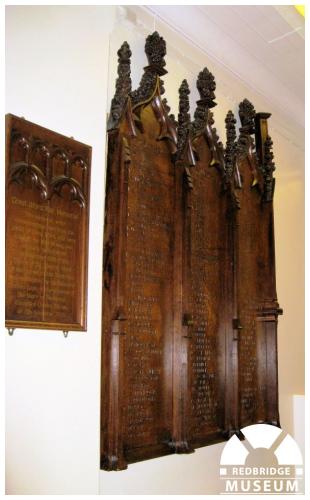 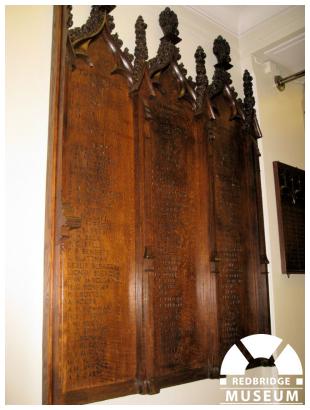 The St. Clement’s Church memorial commemorates 285 ‘men of the parish of Great Ilford’ who died in the First World War.

In 1916, as casualties among parishioners mounted, the church council agreed to a permanent commemoration to honour those who had lost their lives. A committee was formed of church warders Messrs Edwin Hodnett and A. W Green, together with a member of each of the daughter churches (St. Mary, St. Andrew and St. Alban), and with C. A. Nicholls of the London County & Westminster Bank as fund treasurer.

The committee decided upon a brass tablet in addition to four stained glass windows depicting St. Clement, St. Mary, St. Andrew and St. Alban. The criteria for inclusion on the St. Clement’s memorial was that the deceased must have been an active member of the congregation - something which led to the exclusion of some of the fallen sons’ of church members.

When the daughter churches expressed a wish to erect their own memorials to their own congregants, St. Clement’s Church Council stated that the mother church was the only suitable place to honour all of the parish fallen. The Reverend Ottaway of St. Clements, however, stated that if the daughter churches wished to finance their own memorials they must also be willing to fund the parish memorial in the mother church.

The daughter churches proceeded with plans to fund their own memorials, choosing not to abide by the same criteria: that the deceased must have been an active member of the congregation. It should be noted that as a result of several churches having their own commemorations, many of those named on the St. Clement’s memorial are duplicated elsewhere such as at St. Alban’s, St. Andrew’s and St. Mary’s.

After the war, fundraising began in earnest and on Remembrance Sunday 1919, the memorial windows at St. Clement’s were unveiled by the Bishop of Chelmsford.

On Remembrance Sunday the following year, a roll of honour bearing the names of 285 of the fallen was unveiled at a total cost of £1,700. The roll of honour was presented on an ornately carved oak screen comprising six panels, each topped with carved finials. One panel component was inscribed with a dedication referring to the memorial windows.

Following the Second World War, the congregation of St. Clement’s dwindled and it proved financially untenable to maintain the building in Park Avenue. In 1977, the church moved to Cecil Hall in Granville Road, less than a hundred metres away, and the old St. Clement’s Church was demolished to make way for an apartment block. The memorial oak panels were re-erected in Cecil Hall and many of the windows (including those commemorating the dead of the First World War) were removed from the old church and superimposed on windows in the new church.

In 2002, St. Clement’s closed and the memorial panels were moved into temporary storage under the care of the Essex Branch of the Western Front Association. Three years later, the six upper-panel components were re-erected in one of the corridors at Redbridge Town Hall. The size of the memorial did not permit the lower section to be installed and so, apart from one central panel, the remaining five lower panel components (which were) were disposed of by permission of the Church.

The central panel, which was retained, bore an inscription which referred to the memorial windows at St. Clement’s church. As it would not have made sense to include it alongside the roll of honour, the plaque was subsequently donated to Redbridge Museum. This plaque is now all that remains of the original window memorial.