These are just some of the local family stories of those who survived the war. Of the 8.7 million British and Empire troops who served at some point during the war, there were around 1.1 million deaths, meaning that around 88% survived.

To find out more about those who died, search The War Dead

The Battle of Gaza: Ernest Abrams

He worked for the Ilford Gas Company and had been a part-time soldier with ‘C’ Company,

4th Battalion, the Essex Regiment since 1913. This Company was composed of around 200 men recruited from Ilford and the surrounding areas.

When war broke out Ernest was 18 years old and volunteered to stay with the battalion to fight abroad. With the 4th Essex, Ernest took part in the failed invasion of Turkey at Gallipoli in August 1915. Then, on 26 March 1917 at the first battle of Gaza, Ernest was shot in the arm.

After recovering, he returned to his unit and eventually finished the war in Beirut, Lebanon. He arrived back home in April 1918. Many years later he donated copies of his wartime photographs to Redbridge Museum.

Listen to an interview with Ernest Abrams. 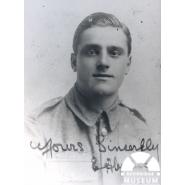 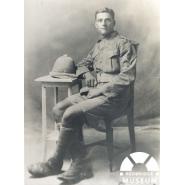 William White lived for most of his life in St. Mary’s Road, Ilford.

Before the war he worked as a labourer on the Great Eastern Railway. In August 1914

After surviving Gallipoli, William was sent to Egypt and then Palestine. On 25 November 1917, after the third battle of Gaza, he was captured and spent a year in a Turkish prisoner of war camp before finally returning home in January 1919. He later worked at Ilford Central Library as an attendant until he retired.

After the war William learned how to type and wrote a remarkable 250 page memoir which gives vivid descriptions of his experiences:

‘Captivity in the hand of the Turks taught us what hunger is really like. We would have sold our birthrights, or anything else for that matter, for a good meal of either stew or bully beef.’

‘Our meals always consisted of stewed wheat, more stew than wheat...Tiny cubes of mutton or goat flesh were present in this porridge, the ratio being about 2 cubes to every tin. We compiled a roster to ensure that each prisoner got his fair share of this infinitesimal portion...Potatoes boiled in their earthy jackets and served with the water in which they had been boiled...4 tiny potatoes and a sprinkling of dirty greasy water being each prisoner’s portion.’

‘The limit was surely reached when grass, green grass, was boiled and set before us. Hungry as we were, we could not tackle this mushy hors d’oeuvre. It proved to be horrible and bitter as gall, the only point in its favour being that it was never repeated.’ 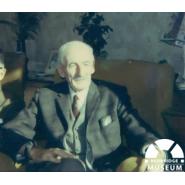 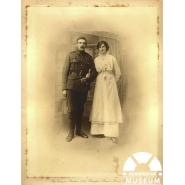 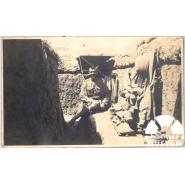 Paul Oliver, who lives in Ilford, was interviewed by Redbridge Museum about his father’s wartime experiences. His father, Henry Oliver, lived in Hackney and volunteered for the army in 1915, despite being under-age.

Dennis Watkins, who lives in Wanstead, was interviewed about his father’s wartime experiences. His father, Frank Watkins, was a prisoner-of-war during 1918.