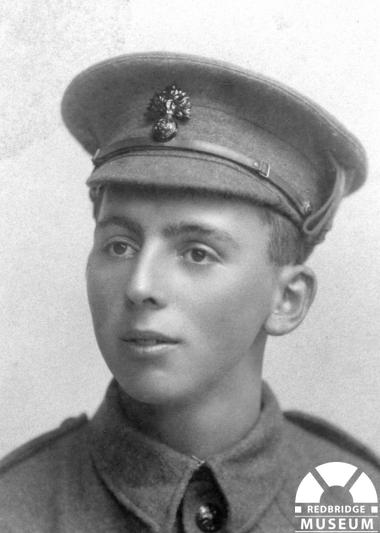 Arthur Thomas Handley lived with his family above his father’s fish and poultry shop at 72-74 High Road, Ilford. At the outbreak of war, Arthur Thomas was indentured as an apprentice to an engineering company in east London.

According to a family story told to Redbridge Museum, in the early days of the war, Arthur was said to have become deeply upset when given a white feather by a young woman at work. It was not uncommon for men not in uniform to be presented with this symbol of cowardice as a means of shaming them into enlisting. Despite being bound by his Articles of Apprenticeship to remain at work, Arthur ran away to enlist in March 1915, aged 20 years old.

In his first letter to his parents’ home on the 22nd March 1915, Arthur expresses his concerns about leaving his apprenticeship:

As Mr. Reader [his manager] is not Patriotic enough to give me permission to join the forces I have joined on my own account.

Now Mum & Dad please do not worry, as I have absolutely had to go. I cannot express what my feelings have been like ever since the war started. Do not tell Dora and unsettle her just yet. I trust you will forgive me going in this fashion but I can see no other course. By my joining I hope you will one day have just cause to be proud of.

The last page appears to be part of another letter, also on the same theme:

’[Mr] Reader cannot claim damages off Dad. I've found that out. And on no account pay any money to cancel my indentures. It's not worth it…’

Please do not try to find me, then you can be ignorant when he inquires. I will write after a time when things will perhaps have blown over a bit. Again please do not try and find me. I shall be alright.

After training in North Essex, Arthur travelled with his battalion by train to Portsmouth for embarkation to France. It is said that when the train was approaching Ilford station, Arthur wrote his father a hasty note and tied it to a penknife and, as the train shot through the station, he threw it out of the window. The penknife with note attached was retrieved from the platform and delivered to his family who journeyed to Portsmouth to be briefly re-united with Arthur before he left for France.

Arthur served with the Royal Fusiliers in Belgium. Below is a transcript of the last letter he sent to his mother on 13 August 1917. Just three days, Arthur was killed after being hit by a German shell, aged 22 years old. He is buried in Hooge Crater Military Cemetery, Belgium.

Many thanks for your parcel of Aug. 8th. Yes I have received all the others and wrote acknowledgements almost at once, including Pendennis. That makes the third time my letters have gone astray to different persons. However I have written another letter since. Please do not send any more food parcels till I write and say so.

Am attached to "B" Company for a week or two but there is no need to change my address when writing.

I have very little news, but will probably be unable to write anything for a few days, so do not be surprised if you do not hear. Will write again as soon as I can.

With best love to all,

I am your very affectionate Son

P.S. Have you seen the "Eastern Mercury" a Leytonstone paper for Aug 7th.

My name appears in the war items column.

A letter from Arthur to his father was published in the Autumn 1916 school magazine. At the time he had been wounded and was in hospital at Govan (Glasgow). He wrote;

‘Owing to the advance, we were miles from the least sign of civilisation. A wash or a shave was unheard of. If we had a drain of water to drink we were satisfied. A loaf between ten men, a tin of bully beef between two or three, and a few biscuits was practically our only food all this time. Nobody had any cigarettes, so we choked ourselves with shag and “issue” tobacco. If we had some “fags” we would have fought the whole German Army.

We took up our battle positions on September 9th. Our guns had been raining shells on the German positions ever since the advance started. The L. R. B.’s, the Q. V. R.’s, and ‘B’ and ‘D’ Companies of my battalion were to go over in daylight (4.30 p.m.), my company, ‘C’ Company, and the Q. W. R.’s being in reserve. The boys went over, and I watched them go. It was a sight too magnificent to describe. I never saw ‘extended order’ done so well on a parade ground. Not a man flinched.’

Arthur described the horrors of the battlefield and praised German resistance (parts of the letter not published in Chronicles!) before continuing;

‘All this time we were losing men fast, as we were continuously bombarded with every description of shells. Night came, but of course no sleep. An extra sharp outlook had to be kept, especially as the wounded were crawling in from the open. That was the longest night I have ever spent. How thankful we were when dawn broke… About 4 p.m. on September 10th my company had orders to take the trench, supported by the Q. W. R.’s. My orders were to take my guns across as soon as the line had been taken. The boys went over in the same style as at Gommecourt on July 1st…’

They did not take the German trench on this occasion but fell back on their own. Arthur’s letter concludes;

‘I was hit in the jaw by a piece of shrapnel at 4.30 p.m. It was not bad enough to leave the boys for just then, so the jaw was bandaged up and I remained. About 6 p.m. I was hit again, in the ear this time, and was knocked unconscious for a few minutes…

It was useless for me to remain in the trench, so I got out over the top (the only way) and into the wood. How I got through that wood alive and reached a dressing station I can hardly tell. I only know a sergeant helped me a part of the way.’