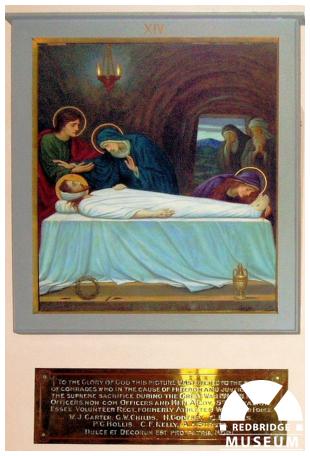 A painting dedicated to the men of the Essex Volunteer Regiment who died in the First World War is displayed within St. Mary the Virgin Parish Church, Ilford. The painting, by church artist A. E. Fellowes-Prynne, depicts the body of Christ in the tomb.

A brass plaque situated below the painting bears an epitaph, beneath which are inscribed the names of seven members of the regiment who lost their lives.

The Essex Volunteer Regiment was created in 1915 to coordinate various local militia units set up in the early weeks of the First World War. These included the Ilford Civic Guard, the South West Essex National Volunteer Reserve and several other Volunteer Training Corps. The Regiment was designed for home defence and consisted of men usually too old to join the regular army or who were in reserved occupations. They took part in drills, exercises and patrols. In 1916, the Regiment became officially attached to the Essex Regiment of the regular army.