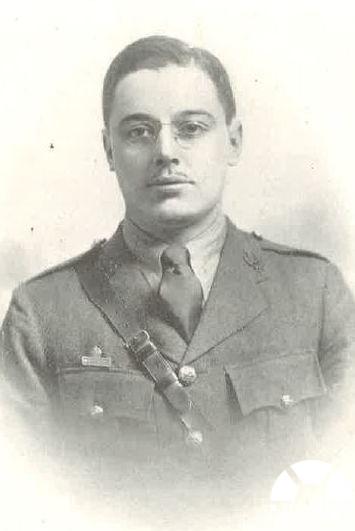 Leslie Gerard Stenning was born in 1894 to telephone assistant clerk Henry and his wife, Selina Stenning. Leslie was the youngest of six children. At the time of the 1911 census, Leslie was living in the family home at 16 Norfolk Road, Seven Kings, Ilford and working as a bank clerk, his older brothers also worked as clerks.

Leslie went to Ilford County High School, where he was a key player for the football and cricket teams.

Leslie enlisted in the army with the 1/6th Battalion, Essex Regiment. He was promoted to Lieutenant and was sent to Gallipoli. In Gallipoli Leslie was shot and taken to a hospital ship bound for England.

Leslie wrote home to his parent’s ‘I should have told you that I owe my life to the bravery of my men. When they saw that I was hit they carried me in a… rain of bullets and shells, two miles to a place of safety. Apparently my love for my men was well reciprocated.’

These would be the last words Leslie’s parents would receive from their son as he died a few days later, on 1st September 1915, from dysentery and the effects of his wounds. Leslie died on board the hospital ship Soudan, only three days sail away from England. His body was transferred to the military hospital at Devonport and brought to Seven Kings.

In an article celebrating the life and sacrifice of Leslie Stenning the Ilford Recorder (10th September 1915) the Recorder reported Leslie’s rise to captaincy: ‘From a Second Lieutenant in 1913 to full Lieutenant in 1914 and Captain in 1915 is a rapid rise even in these times.’ However his captaincy was never made official as he had only been in the position of acting captain for two days when he was shot and wounded.

Leslie’s funeral was a huge affair and was reported in the Ilford Recorder on 10th September 1915. The route from Norfolk Road to St Mary’s Church was lined with mourners:

‘A band played the “Dead March” with solemn effect and the firing party… composed of members of the 6th Essex Reserves walked with reversed arms. The coffin, covered with a Union Jack and surmounted by the deceased’s helmet and sword was drawn by four horses on a gun carriage and several officers walked immediately behind with their swords reversed.

After the final committal sentences, the body was lowered and a sharp order rang out. The soldiers raised their rifles skywards and three volleys were fired. A bugler then sounded the Last Post and the impressive proceedings were over.’

Leslie joined Ilford County High School in September 1905, as an eleven year old. His father, Henry, was an Overseer at the GPO and the family lived at Gordon House, Norfolk Road in Seven Kings. He passed the Oxford Senior Local examination in 1909 and left school to become a bank clerk
When the Cleveland School War Memorial was revealed from behind the wooden panelling in the main school hall in 2011, his name was included. He had attended this Ilford Elementary School prior to joining Ilford County High School. Leslie’s record of 71 wickets taken in a season playing for the School’s Cricket team First XI stood for almost twenty years and was only surpassed in 1923.

Leslie was one of ten Commissioned Officers listed in the first Roll of Honour in the Christmas 1914 edition of the school magazine, Chronicles, and in the school hall. He was a 2nd Lieutenant in the 6th Essex Regiment.

Whilst his two brothers were stationed in Egypt in late 1914 (see below), Leslie was home on leave from the 6th Essex Regiment. The Chronicles records that, ‘He tells us that so many Essex Territorials have volunteered for active service that the battalions have been allowed to volunteer as units under their own officers. This is far better than making a composite service battalion from men from half-a-dozen different units.’  The editor continues, ‘We hope that we have finally disposed of the myth that Essex men are more readily affected by funk than by patriotism.’

The Chronicles reported his death within its Christmas 1915 edition

‘Old Parkonians heard with extreme regret of the death of Lieut. Leslie Gerald Stenning, 1st/6th Batt., Essex Regiment. Wounded in the costly Dardenelles fighting, he died on board ship, almost within sight of home. He was interred at St. Mary’s, Ilford, with full military honours. Lieut. Stenning was one of the most prominent boys in School sports while he was on the roll, and never relaxed the bonds which bound him to his old School. He kept goal for the First XI. Of the Old Parkonians Football Club, and did great things for the Old Boys’ Cricket Club. Old Boys probably remember that the dead soldier’s voice was often heard in friendly but rather trenchant criticism at our business meetings. He has left a great gap in our ranks.’