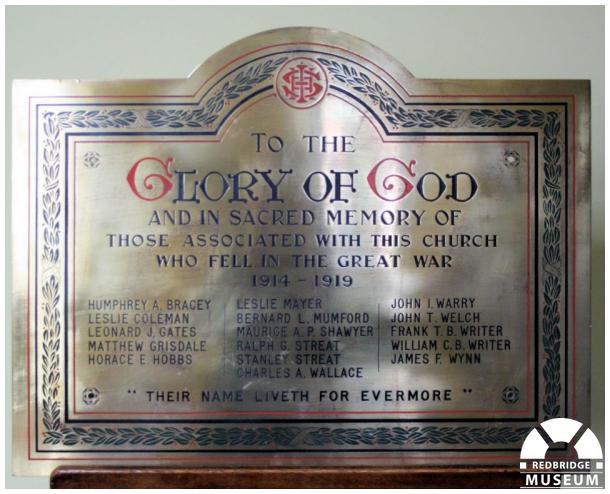 Sixteen young men of the congregation of Cranbrook Wesleyan Church in Ilford, are commemorated on a solid brass plaque mounted on an oak base which is currently on display at The Drive Methodist Church, Ilford.

The plaque was unveiled on Sunday 6th June 1920 by Mrs. W. Mumford, whose son was among those who lost their lives.

The event was featured in an article by the Ilford Recorder on Friday 11th June 1920:

Impressive scenes were witnessed at Cranbrook Wesleyan Church on Sunday evening when a handsome memorial of the 16 young men of the church who laid down their lives during the war was unveiled by Mrs. W. Mumford, whose son’s name was in the following list of the honoured fallen engraved upon the enduring brass tablet…

The memorial consisting of a solid brass plate with choice border, is mounted on an oaken base, and affixed to the mural space at the south end of the centre aisle near the main entrance. It was draped with the Union Jack on Sunday evening.

A big congregation assembled crowding the church to the doors, and the whole service, conducted by the resident minister, the Reverend Omar Pearson, was of a solemn yet uplifting character…

When the time came for the central ceremony of the service, the choir, church officers, and the minister moved slowly along the middle aisle towards the covered memorial, singing the hymn ‘For all the saints who from their labours rest,’ the vast congregation, standing and facing the same direction, joining in the harmony.

Spectators sympathised with Mrs. Mumford in the task of disclosing to public view the tableted names of the immortals, seeing that one of her own dear boys was included, but the lady bravely performed the ceremony of removing the Union Jack, and even had the courage to utter a few words in appreciation of the dead lads’ heroism and sympathy with all the families who had been bereaved.

Researched by Redbridge Museum with thanks to Patrick O’Mara

www.the-drive-methodist-ilford.org.uk, history (History of the church)