In October 1915, Hainault Farm was one of a number of Royal Flying Corps (R.F.C) airfields hastily set up to protect London from German bombing raids. The local area was now on the ‘front line’ of the war.

Hainault Farm was one of a number of Royal Flying Corps (R.F.C) airfields hastily set up in October 1915 to protect London from German bombing raids, first by airship and then from May 1917, aircraft.

Hainault Farm, on the eastern outskirts of London, was a good location to try and intercept German raiders.

It featured well-drained land that was surrounded by open countryside in all directions and was close to railway stations, useful for personnel travelling there. The squadron of aircraft was split between Hainault Farm and Sutton’s Farm, Hornchurch. Nearby Forest Farm in Fairlop was also used as a training airfield for the Royal Naval Air Service. 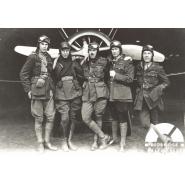 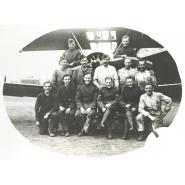 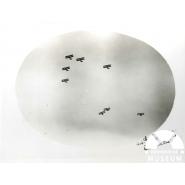 The war brought a new menace from the skies

German airships, most infamously Zeppelins, had caused outrage by bombing London in night-time raids, beginning on 31 May 1915. These raids led to the deaths of 127 people with 352 injured that year alone. In total there were 12 raids on London and 40 more over the rest of the country before the war’s end. Although they had been expected, the raids caused terror and serious damage.

Air raid precautions put in place included an observation point in the high water tower at Claybury Hospital, Woodford Bridge; neighbourhood patrols for spotting airships at Derby Road, Woodford; and a searchlight fitted to an Ilford Council tram that was used to spotlight airships attacking London.

Ethel Allen, a young teacher at Highlands School in Ilford, was one of thousands who witnessed airship bombing raids over London at close hand. On 3 September 1916, she wrote to her boyfriend, Jack, a stretcher-bearer in France:

‘About one a.m. I heard the guns a long way off, but they came nearer and nearer until the roar was terrifying...I looked out and there it was, like a huge silver cigar in the searchlights. The shells were bursting all round it. The wretched thing travelled quickly across the sky dropping bombs as it went...

Presently we saw what looked like a very bright star and we watched it become large and larger until there could be no doubt it was the Zeppelin in flames. The thing had turned to come back towards us, but...we saw it crumpling up and by-and-by it dropped to the ground. Oh it was a terrible sight...I shall never forget as long as I live.’ 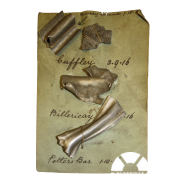 From May 1917 to May 1918, new German ‘Gotha’ and ‘Giant’ aircraft launched further deadly raids on London.

These raids led to 486 deaths and 1,432 injuries across the London area, including several Ilford residents who had been in central London during the attacks.

In Ilford, many homes and buildings were damaged by falling anti-aircraft shells. Houses in Argyle Road, Auckland Road, Clandon Road, Grange Road, Meads Lane, Thorold Road and Windsor Road were all hit, although fortunately there were no injuries to residents.

The roofs of Cleveland, Loxford and South Park Schools were damaged by another raid in December and on Tuesday 17 December, Ilford Council were forced to hold their meeting in the Town Hall basement due to an air raid. Woodford Council, meanwhile, purchased twenty-four steel helmets to protect firemen during air raids at a cost of £10.16s.

In 1919, Ilford’s firemen were recognised for their wartime service in dealing with air raid incidents by being awarded a silver medallion and certificate by their employers, Ilford Council. A report noted that there were 64 air raid warnings throughout the war, with the highest number, 29, occurring in 1917. In total, eight fires were caused by the raids.

Alfred Tingay, Second Fire Brigade Officer, was one of 150 firemen across the country awarded the British Empire Medal on 7 July 1920 for ‘conspicuous courage and devotion to duty at fires at a munitions factory and a chemical works’. 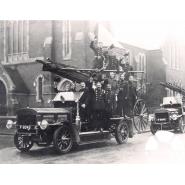 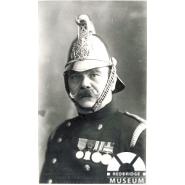 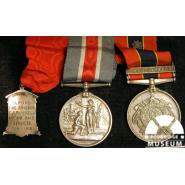