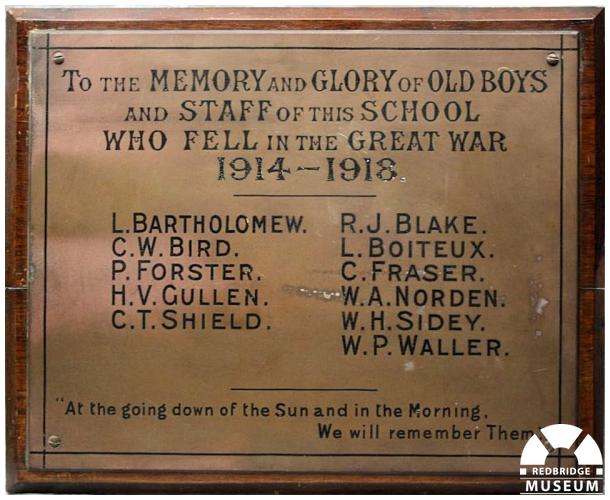 Twelve former students of Clark’s College, Ilford, are commemorated on a brass plaque which was displayed at the school on Cranbrook Road until it closed in 1974.

Clark’s College was founded by George Clark: a former bank clerk who later joined the Civil Service. Frustrated by the lack of tuition offered by schools and institutions to pass the necessary examinations required to progress as a civil servant, 20 year old George founded his own evening classes. These proved so successful that he resigned from the Civil Service to concentrate on his teaching career.

In 1913, George opened premises in Forest Gate and later moved to Cranbrook Road, Ilford, in 1915.

During the First World War, the College founded classes to train young women so that they may fill positions vacated by men who had left for war. Later, classes were founded for disabled servicemen and Braille was taught to those who had lost their sight.

When the school closed in 1974, the memorial was placed in storage in the care of the Old Clarkonian (Ilford) Association who kindly donated it to Redbridge Museum in 2015.