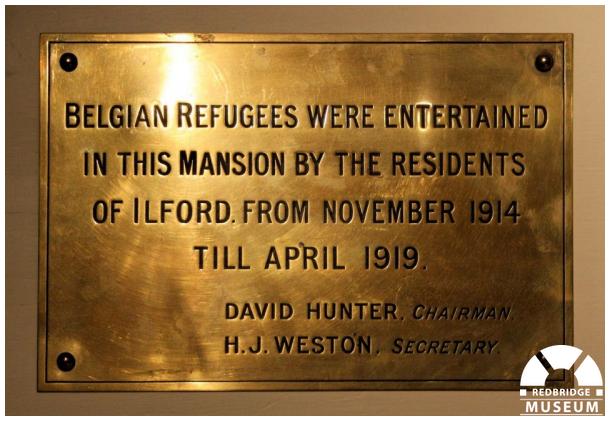 A brass memorial plaque at Valentines Mansion commemorates the Belgian refugees who were housed there during the First World War.

From September 1914, around 250,000 Belgian refugees arrived in Britain to escape the fighting. The British government offered ‘the hospitality of the British nation’ and gave financial support. Local voluntary committees were set up to find homes for the Belgians.

Ilford Council agreed to provide Valentines Mansion. The Council had bought the house in 1912 and it was currently empty. The Mansion was equipped and furnished by local residents’ donations. A committee fund-raised to cover ongoing costs.

The local newspaper recorded that on 10th November 1914, the first group of Belgian refugees of “nine gentleman, eight ladies and four children…of a class similar to Ilford people” arrived at the Mansion.

Valentines Mansion was home to 270 refugees over the course of the war. Most stayed for a short time before finding accommodation elsewhere. A child was even born in the house on 28 November 1914 – she was named Maria Valentine Franck.

At some point after the war, this plaque was erected above the entrance hallway fireplace in the Mansion. The plaque states the refugees were in residence until April 1919 although all the evidence appears to indicate they had left by May 1918 as the Mansion was converted into a military convalescent hospital from October 1918 until March 1919.

As part of a major restoration of Valentines Mansion in 2009, the plaque was re-sited from the hallway to another room in the building.