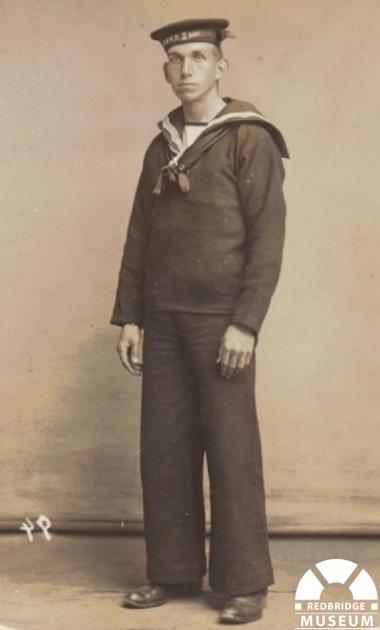 Edgar was born on 17th September 1894. He started at Ilford County High School the day after his 13th birthday and continued to study at the school until 26th July 1911. He had previously been a pupil at Salmeston School, Margate and Christchurch Road School, Ilford. During his time at Ilford County High School, he passed both the Oxford Junior and Senior Local Examinations as well as examinations in French, Drawing and Model Drawing. When he left education, he became a commercial clerk. Edgar’s family lived in Balfour Road and his father, Robert worked as a journalist.

The Christmas 1914 edition of the school magazine, Chronicles, recorded that Edgar (alongside J. Sage and A. Taylor) as part of the R.N.V.R. took part in the ‘extraordinary defence of Antwerp.’  Edgar had been Rifle Captain at the school during his fourth year and was winner of the “Donegall” Bronze Medal. Furthermore, the Chronicles notes that the three companions, ‘did not take the wrong turning, and are therefore not interned in Holland.

In May 2015, William Cuthbert, nephew of Edgar and Percy Armstrong, visited Ilford County High School in order to mark the centenary of his uncle’s death and lay a cross on the school memorial. He explained the following;

According to Chronicles, “Edgar was the first brother to be killed and he died on 4th May 1915 at Gallipoli under tragic circumstances right beside his brother Percy. Just as Percy had wormed his way across an open plateau with some rations and had reached his brother’s side in the trench, a sniper’s bullet, evidently intended for Percy, killed his brother instead.’

Mr Cuthbert gave the school copies of the above photograph along with an original letter that his brother Percy wrote to their parents following Edgar's death and the memorial their father subsequently placed in the local paper. Mr Cuthbert’s uncle George (who survived the war) carried this in his wallet all his life.