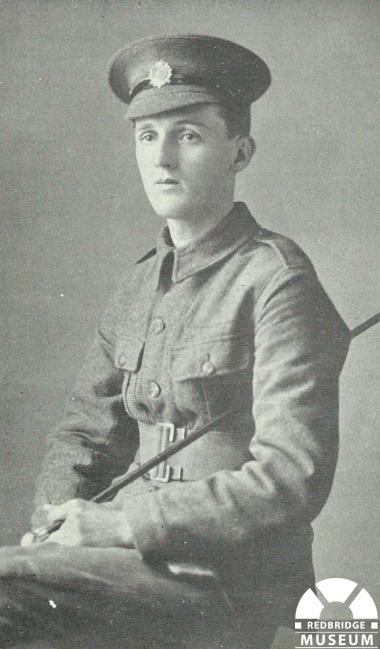 James was born on 7th March 1897 and he attended Ilford County High School between 8th September 1908 and 22nd July 1912. His elementary school education took place at Highlands School in Ilford. He was the first Ilford County High School pupil to break the five-minute barrier for the running of a mile. In 1912, he passed the Oxford Senior Local Examination and left school to become a clerk.

His family lived at 29 Seymour Gardens, Ilford and his father worked as a Rate Collector in Stepney.

James was recorded on the first Roll of Honour (in the Christmas 1914 Chronicles magazine). It gives his regiment as the London Rifle Brigade. His photograph, taken in uniform, fronts the Summer Term 1915 edition of the school magazine, Chronicles. The caption was, ‘Rifleman J. Wynn. Killed in action, May 1915.’ Inside the magazine, there was a dedication to him from a member of the Old Parkonians Tennis Club. His integrity was celebrated in the phrase, ‘Jimmy Wynn could always be trusted to play the game “without an umpire.” He did it most heroically on the last day of his life.’ When dying, it was suggested that he asked, ‘Have they broken through?’ showing more concern for his country than himself.

When he died, he was carrying with him his Oxford Senior Certificate, as he was at that point negotiating for a commission. The certificate and most of his effects disappeared and so the University broke it rules and issued a replacement certificate to his father.

The Ilford Recorder announced his death on 28th May 1915, including the following account from Lance-Corporal Harry W. Gill;

‘I was the N. C. O. of his section, and had the great pleasure of “showing him the ropes” during his first spell in the trenches, and was also with him when he died. Although only in the firing line for a comparatively short time, poor Jimmy was easily the most popular man in his section, owing to his splendid courage and cheerfulness under all circumstances.

On the day before his death, he voluntarily carried a wounded man from the trenches to a dressing station, nearly a mile away, in broad daylight, and utterly regardless of the fact that a German maxim was playing on him the whole way down, and bullets were striking the road all round him. The magnificent deed he carried out without sustaining any injury, and it was not officially recognised owing to the fact that all the company officers had been either killed or wounded.

He was struck by a splinter of shrapnel during a terrific bombardment, and died an hour afterwards​ without regaining consciousness. He was shooting Germans as fast as he could load his rifle when he was himself hit, and the last words I heard him say were, “Have they broken through?”

Jimmy Wynn went “all out” in everything he did, and even during the greatest battle the world has ever seen, and where bravery and self-sacrifice were the order of the day, his conduct will always stand well to the fore in the minds of those who knew him.

His friends and school may well be proud of him, and I shall always remember Jimmy as a sportsman and a gentleman, and, above all, a hero.’

A comrade wrote the following letter, describing his death in North Ypres on May 6th; the letter was published in the school magazine in the Summer of 1915;

‘We were just having a rest- the first since we have been out here, and had just completed a week, when we were called away with the Brigade about 15 miles down on our left. I will not weary you with the details of our journey. The day after we arrived we had to parade at 4.30, and did not know till we paraded that we were going to the firing line- I’ll leave you to guess where by recent war news in the papers. We had to march nine miles under shell fire the whole way, and we had some marvellous escapes. When we arrived we did not know who was in front or on our left or right, and it was our business to get in touch with both. We were naturally “whacked” when we arrived at 2 o’clock in the morning, but as it is dawn at 3.30, we had just about an hour and a half to dig ourselves in. We did it, somehow. When it was finished most of us fell off to sleep, but we did not have much chance to sleep long as we were shelled all day without a stop- in fact, not a second seemed to pass without shells falling all around. Luckily these shells were ranged on a hedge which ran parallel with our trench and about 50 yards behind it. However, we lost a good many that day. We moved to another position on a hill the same day at dusk and started digging ourselves in, but the Germans apparently got wind of it at once and put several shells (we must have had over ten thousand shells that first day) right where one of our companies had started digging. The next day we got shelled as heavily as during the previous day, and the following two days were just the same, the Germans sending over some very big stuff, including ‘Johnsons’ (I suppose they ought to be called ‘Willards’ now). The trenches we had occupied up to then were just behind the front line, but we now relieved another battalion from the front line trenches. For the third time we had to dig- this time a fire trench in front of the main trench. The Germans were 600 yards away and did a lot of sniping, probably from a lot of farms that were between the lines. The shelling, although pretty warm, was not so bad as previously.

Everything was all right the first two days, but in the afternoon of the third day, after having a long talk with our officer, we noticed green smoke issuing from their trenches. It was that asphyxiating gas you have probably read about. We put on respirators which by an extraordinary stroke of luck had been issued to us only about an hour before. The gas made us choke and cough and the man next to me went right off and fell over in the trench. However, he was as right as rain a little while after.

That was the beginning of the attack. Then they shelled us as we have never been shelled before. The scene is impossible for me to describe, or far anybody else for that matter. There is not a man who came back who did not have dozens of marvellous escapes. The parapet was blown in and I was slightly buried, but not hurt in the slightest. The attack was finished in the main by 7.15. All they had accomplished opposite us was simply to get nearer- digging themselves in about 150 yards away from us. Two nights after we had to retire because we were holding an impossible position, but everything went all right, and we are now in reserve. It is a fine rest after our strenuous time. Unfortunately we miss a lot of old faces, but we have the satisfaction of knowing that we fulfilled the purpose we went there for. Poor Jimmy Wynn was killed.’

In fact, Jimmy’s battalion lost 400 men during the attack described above, including all of its officers.