© From an original photograph reprinted in the Ilford Recorder, 13 June1996

When an armistice brought an end to the fighting at 11 o’clock on the morning of Monday 11 November 1918, local people rushed out in the streets.

Houses, gardens and shop fronts were quickly decorated with Union flags, church bells rang and people sang patriotic songs. At night time, shops and houses opened their blackout blinds so the streets were fully lit for the first time in several years and fireworks were let off.

Celebrations continued throughout the week with bonfires in some streets and many effigies of the German Kaiser were burnt. A Victory Dance was held in Ilford Town Hall later in November which attracted 400 people with another 100 turned away due to limited space.

In Woodford, celebrations were typically more restrained and the news was received: ‘with unmistakable signs of relief and satisfaction, although there was nothing in the way of exuberant demonstration...In the evening services were held in various churches in the district, and at the cinema in George Lane a large crowd assembled, many of whom were unable to obtain admission. Inside, enthusiasm prevailed, and Councillor A. J Hawkey, J.P who was asked to say a few words, gave a short, rousing address.’

Although the armistice had led to a ceasefire, it wasn’t until the Treaty of Versailles was signed on 28 June 1919 between the Allied Powers and Germany that peace could finally be declared.

There was a Victory Fete at Valentines Park on Saturday 21 June 1919 to raise funds for the proposed Ilford war memorial.

Saturday 19 July 1919 was declared ‘Peace Day’ by the government. However, in a move that was widely criticised, Ilford Council decided not to spend money on official celebrations as it was felt they could not be afforded. Despite this, local people organised a variety of events. 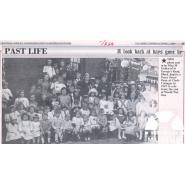