In the first 3 months of the war, Germany nearly achieved victory.

Only desperate defence by French, British and Belgian troops prevented this. Many men in Ilford, Wanstead and Woodford volunteered to fight at this time.

While some may have viewed the war as a great adventure, many others felt it was their duty to come to the aid of Britain’s small professional army and prevent it being overwhelmed by the huge German forces.

Ilford, as the home of the 4th Essex Battalion of the Essex Regiment became a centre of recruitment with several open-air rallies. Despite this, by spring 1915, a local newspaper asked Is Ilford Doing Its Duty? and there was concern that the number of volunteers was decreasing.

This picture was repeated across the country and with mounting losses, the government introduced conscription in early 1916.

By late 1915, about 525,000 British soldiers had been killed or wounded. Despite 2 million volunteers, the army needed more men.

From March 1916, all men aged 18 to 41 years old had by law to join the army, known as conscription. This was controversial because military service in Britain had always been voluntary.

Local tribunals judged those who did not want to be conscripted. In the first 6 months of 1916, 750,000 men in Britain asked not to join the army, mostly for family or business reasons. In some cases, exemptions were given for several months to allow men to sort out their affairs but most were refused.

Tribunals to examine applications for exemptions from military service were held in Ilford, Wanstead and Woodford.

The Woodford Tribunal was held at the Woodford Urban District Council Offices. Chair of the tribunal was William Henshaw, a 59 year-old charity registrar. He was supported by the Chairman of Woodford Council, Alfred Hawkey and three other local councillors. The two military representatives were led by Major Goschen, who tended to take a dim view of applicants.

Despite this, applicants were allowed to put forward their objections. Although few were given outright exemptions, many were given time (from weeks to several months) to sort out their affairs before they had to join the army.

The Ilford and Wanstead tribunals followed a similar pattern. The vast majority of applicants were for business or personal reasons.

More details about the Ilford tribunal. 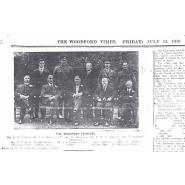 Recent research by the Peace Pledge Union has identified 100 conscientious objectors in the local area.

About 16,500 men in Britain refused to fight because of their religious or political beliefs. They were known as Conscientious Objectors, although many simply saw them as cowards.

About 3000 served in the army as labourers but didn’t fight. About 1400 joined the Friends Ambulance Unit, helping the wounded. However, 6000 refused to support the war effort and were sent to prison, with 80 dying through their treatment.

The picture is of Thomas Corder Catchpool who lived with his two brothers at a house called ‘Ronceval’, on The Green in Wanstead.

A dedicated Quaker, he volunteered to join the Friends Ambulance Unit (F.A.U) almost immediately at the outbreak of war.

However, when conscription was introduced in1916, Thomas and a group of other F.A.U men were determined to show their opposition by returning to Britain as conscientious objectors. They believed that forcing men who could not take any part in the war, even in non-combatant roles such as the F.A.U, was unacceptable.

Thomas was granted exemption from combatant service but refused, maintaining that as a conscientious objector with a religious belief against war, he was entitled to absolute exemption from any form of army service. By the beginning of 1919, he had gone through a cycle of release, re-arrest and imprisonment four times, serving over two years in prison. 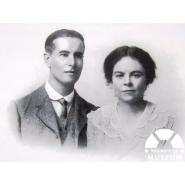