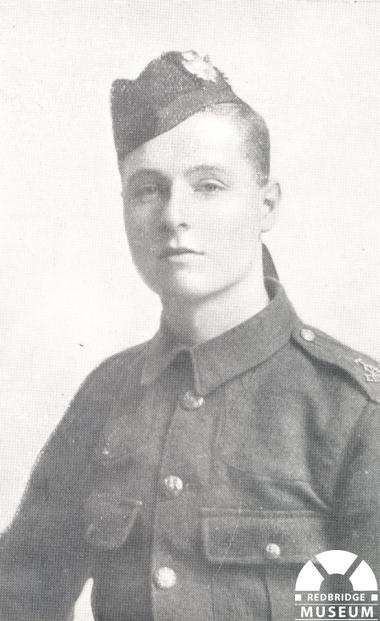 Arthur Taylor was born 22nd April 1893 to Henry and Jannette Taylor; he was the second of their seven children. In 1901, Henry was a foreman of navvies and the family were living in Pembroke Road, Ilford. By 1911, he was a drain and sewer contractor and they had moved to Essex Road in Chadwell Heath.

Educated at Downshall School and the East London College, Arthur became a clerk with Parr’s Bank on Bartholomew Lane in the City of London. He was a renowned athlete, mainly competing in walking races. He was even expected to represent his country at the Berlin Olympics of 1916.

On the outbreak of war, Arthur joined the 14th Battalion, London Regiment (London Scottish) and was serving in France from June 1916. He was killed just a month later, on 8th July, aged 24. A diary entry from someone serving in his regiment states on that day that it was a ‘…fairly quiet morning but the Germans let us have a few this afternoon; one or two in our own trench but were all down the dug outs so nothing happened. A Coy had a Sgt (Taylor) & Officer (Lt Ginger Wilson) killed & a few wounded by trench mortar. ’

Arthur is buried in Maroeuil British Cemetery (III A 6), France.

The family suffered a further loss in 1919. Arthur’s father, Henry, had volunteered for service on 5th August 1914; although considerably over age, he had been accepted as ’under 44’ for active service and was sent to India in January 1916. He had completed three years’ service and was about to return home when he contracted bronchitis and died in hospital on 13th January 1919 in Sialkot, India. Two other sons survived the war, fighting with the Australian Imperial Force and the Royal Air Force.

Second son of Mr H.W. and Mrs Taylor of Chadwell Heath, Essex, born April 22nd, 1892, was educated at Downshall School and the East London College. He began what promised to be a brilliant business career in Parr's Bank, and was a member of the Bankers' Institute. Keenly interested in athletics, he held, the Amateur Championships of Essex and the London Banks. On the outbreak of the war he joined the London Scottish and proceeded to France with the Second Battalion, 22nd June, 1916, and twelve days later died a soldier's death on the field of honour.