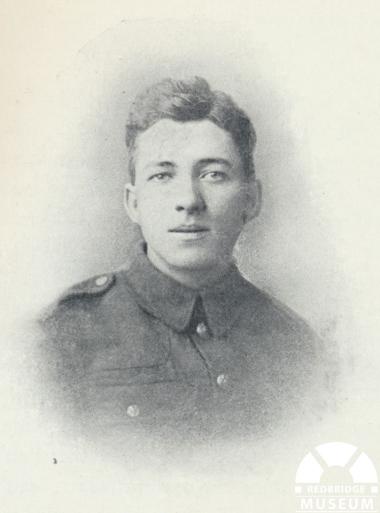 George Bodington was only 15 when war broke out, and it is difficult to think of him as a fighting soldier. He was a bright, thoughtful lad who had several hobbies, and who found life teeming with interest. For years he was a regular member of our Sunday School, and owed a great deal to its influence. He became a member of the Church, and shortly after removed to Newbury Park, where at the Mission Church he gave great promise of developing into a useful Church worker.

He was educated at Goodmayes Council School, and was a clerk in the Pearl Assurance Society. On 19th March 1917, he enlisted, and went overseas the following February, serving there with the 6th Lincolns. On the 2nd of April at Hulluch he made the great sacrifice. The letters of George from the Front revealed a cheerful and courageous spirit, as well as a calm and steadfast faith in God.

Reproduced from Homage: A Record of Our Heroes (a commemorative booklet produced by Seven Kings United Methodist Church c.1920)