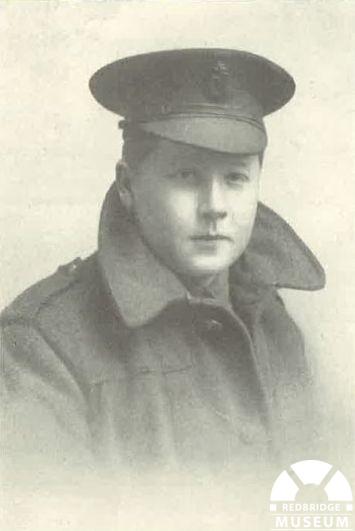 Frederick was born on 12th February 1897 and baptised at St Luke’s Church in West Kilburn on 2nd May 1897. He attended Ilford County High School between 16th September 1907 and 25th July 1912. He was described in the school magazine as, ‘looking like a cherub when in the second form.’ Previously, he had been a pupil at Cleveland Road Elementary School, also in Ilford. In 1911, Frederick passed the Senior Oxford Examination with 2nd Class Honours. He left the school the following year to become a commercial clerk.

Frederick was the eldest of Frederick and Margaret Sauer’s four children. His siblings’ names were Winifred, Elsie and Wilfred. His father worked as a stationer’s assistant and then a printer. The family lived in Green Lane Gardens, Ilford in 1907, before moving to Gordon Road, Ilford by the start of the war.

Frederick is recorded on the Ilford County High School’s first Roll of Honour (in the Christmas 1914 edition of the school magazine, Chronicles). It gives his regiment as the London Irish. He trained at St. Albans. He was ranked as a Rifleman the 1st/18th Battalion of the London Regiment (London Irish Rifles). The ‘London Irish’ served as a sort of ‘Pals Regiment’ for Frederick and other members of the school’s tennis club. They all joined up together.

In the summer of 1915, he was hit by splinters whilst his trench was being bombarded. He was sent back to base with a head wound. It was reported that, ‘the wound proved to be merely a surface wound and he soon rejoined his chums “as tubby and smiling as ever.”’ His regiment, the ‘Irish’ were under intense attack during this period and Frederick had to endure eighteen consecutive days in the front line trenches before receiving a day in the rear to have a hot bath and change of clothes.

Frederick (known as Eric by some in the Chronicles) was killed by a shell that also injured a fellow Old Boy, Jack ‘Sculler’ Macey. He was in the charge at Loos on the 25th September 1915. Frederick was described as ‘one of the most brilliant students of his year.’  He died on 27th October 1915, aged 18 and is commemorated on the Loos Memorial (Panel 133).

‘Pte. Eric Sauer, 18th Batt., London Regiment (London Irish Rifles), whose photograph forms the frontispiece of this number of the Magazine, was one of the most prominent students of his year. His cheerfulness, unselfishness, and gallantry endeared him to his comrades in the ranks. But there was something else in the dead soldier which made a deeper impression on his fellows than mere cheerfulness and pluck. Those fated to stay at home may congratulate themselves that these are the ordinary everyday attributes of the British soldier. To quote the words of a comrade on leave, “He did not see why he should give up his ideals just because he was in the trenches.”  A letter from another comrade and contemporary tells us that “He was game to the last, and a true Christian.”  Example is better than precept. The importance of a life is not measured by its length. The following letter from Sergt. A. E. Macey has been sent on to us by Eric Sauer’s father. It is dated October 29th 1915:-

“You may possibly have learnt that for some days past we have been occupying a part of the line where the trenches are subjected to incessant shelling, and now it falls to my sad lot to have to tell you that our dear chum Eric was killed on Wednesday morning, his death being caused by a shell bursting in a traverse occupied by Eric and his sergeant. It may be less distressing for you to know that death was instantaneous, and together with his sergeant he was laid to rest on Thursday evening, the 28th, in a spot just behind where he fell. (’Sculler,’ my brother, was wounded by the same shell.)

That one so popular and thoughtful for his fellows should have been taken from us is deplored by all the Company, and at the request of his comrades I wish to tender our heartfelt sympathy for your terrible loss.

No doubt you are aware that I have always been billeted with Eric ever since our St. Albans training days, and being in a position to judge, I can say I never met a chap more cheerful under every adverse circumstance, or who more whole-heartedly did his ‘bit’ for the Old Country…

Pte. Sauer had been in the charge at Loos on the 25th September. He and the sergeant and Fred Henke managed on that occasion to get out of touch with their own men, and in the words of the last named, they “formed a section to reinforce the 20th London Battalion, in front of us.”