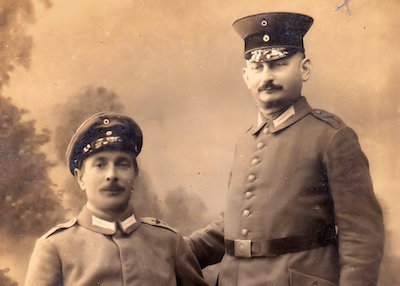 His grandfather, Isaak Halberstadt (right) and his brother-in-law Josef Rothschild, both served in the Germany army. Rabbi Hulbert says:

“They fought for Kaiser not for King and were ready to give up their lives for the Fatherland. People were very proud of their country in those days. My grandfather was an older man in his forties so worked in kitchen duties. Josef was killed in 1914 and is buried in France. “

Isaak died in Germany in 1939, shortly after Rabbi Hulbert’s family escaped Nazi persecution and arrived in Britain. Tens of thousands of Jewish people who had served in the German army during the First World War were turned upon when the Nazi Party came to power in 1933. 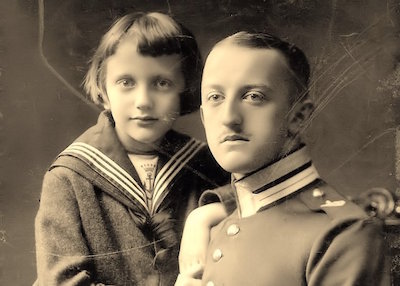 Ursula’s father, August Gerhard Claus, (right) was born in 1890. After school, he enrolled in the Cadet Corps, a military school for young boys, in Dresden, eastern Germany. Here he became friends with Max Immelman, who became a famous pilot in the First World War. Gerhard became a Lieutenant in the German army and is pictured with his younger brother Wolfgang. Gerhard survived the war, dying in 1960.