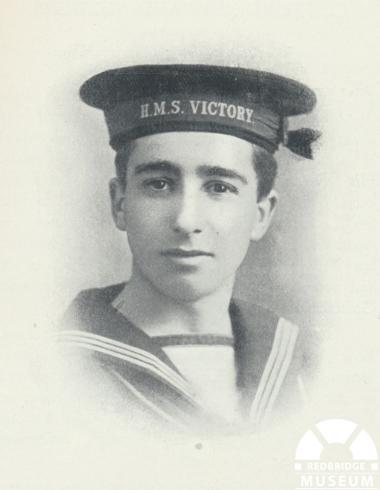 Oliver was born in Tollesbury, Essex on 22nd April 1896 and was the only son of a Master Mariner, Charles and his wife Maria. The family lived in East Ham in 1901 before moving to Betchworth Road in Ilford sometime prior to the 1911 census.

Oliver attended Ilford County High School between September 1910 and July 1912 along with his younger sister. He is also commemorated on the South Park School Memorial Plaque as he attended the elementary school prior to joining Ilford County High School. He was also a member of the Seven Kings United Methodist Free Church and his name appears upon their memorial plaque too. Upon leaving school, he took up his first job in the Ilford Company Electrical Works.

He joined the Royal Navy on 31st May 1915 (exactly one year to the day before his death), no doubt wishing to follow his father’s example of being a mariner. He served on the Vernon and Victory II before joining the crew of the Indefatigable in October 1915. As he had worked as a switchboard attendant prior to the war, he was assigned to the role of Wireman (2nd rate) on board the ship.

Oliver’s ship was sunk during the only large-scale naval battle of the First World War, the Battle of Jutland. Around 4am on the 31st May 1916, the HMS Indefatigable was hit around the rear turret by two or three shells from a German ship, the Von der Tann.

Oliver died alongside fellow old boy, Percy Armstrong when the HMS Indefatigable was sunk on 31st May 1916, aged 20. They had both served in the R.N.V.R. His body was not recovered for burial and so he is remembered on the Portsmouth Naval Memorial.

Reproduced from Homage: A Record of Our Heroes (a commemorative booklet produced by Seven Kings United Methodist Church c.1920)

Oliver was one of the many Ilford County High School Boys who gave their lives that we might enjoy freedom. He attended our Bible Class very faithfully, and there as well as among all who knew him, he was a general favourite. His singularly bright disposition, his simplicity of heart and transparent honesty of mind combined with a quiet strength and native shrewdness won all our hearts. We shall never forget how deliberately Oliver, who was the only son of his parents, formed his plan for sharing in the struggle. He was apprenticed to Electrical Engineering and almost as soon as he was nineteen years of age he joined the Navy to do the same work. In due course Oliver went to H.M.S. Indefatigable. His ship, it will be remembered, was sunk in the Battle of Jutland, and Oliver, as did his father two years later, went down with his ship.