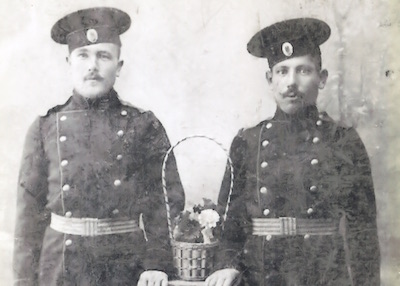 Harris was born in Latvia in 1879 and was conscripted into the Tsarist Russian army as a young man. In 1904, he left for Britain and lived off Brick Lane, working as a cabinet maker with a family of five children. In April 1918 he was conscripted into the British army, aged 39. He was sent to France as part of a Labour Corps in the 9th Russian Labour Battalion.

These Labour Battalions were formed in April 1918 from Russians living in Britain. By this stage Russian Bolsheviks had overthrown the Tsar and made peace with Germany, so Russians in Britain were treated with some suspicion. Army life didn’t seem to agree with Harris. On 2 September 1918 he was fined 3 days’ wages for ‘pilfering peas and beans’. In March 1919, he injured himself when riding a light railway truck, against orders. After treatment he was discharged from the army on 3 June 1919. 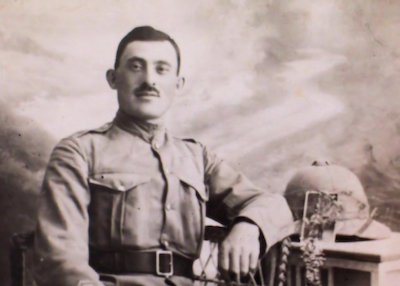 Samuel Fisher came from Russia and by 1917 was living in Stepney with his wife and son. Both Samuel and his wife worked in the textile trade, as many Jewish people did at this time. Samuel was conscripted into the Royal Fusiliers Regiment in January 1918, aged 32 years. He was posted to Egypt but while there his wife Sarah died, possibly of influenza. In October 1918 he was transferred to the 38th Jewish Labour Battalion with whom he served in Egypt and Palestine.

He finally returned to England in August 1919 and was discharged from the army in January 1920. 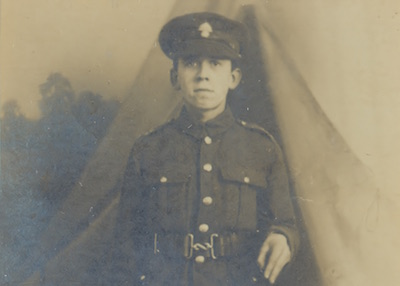 Abraham’s mother, father and older brother came from Poland, in what was then Tsarist Russia. Like many Jews, Abraham and his father Samuel worked in the clothes trade, off Brick Lane. Sometime after his 18th birthday in 1916, Abraham was conscripted into the Royal Fusiliers, which was a typical regiment for many in the East End of London to join. Although no records survive of his military service, his daughter Rita believes Abraham continued to serve for a short time in the Military Police in Palestine before leaving the army. Rita recalls:

“I do remember him telling me the songs and poems from the trenches. Luckily ‘Pop’, always my hero, returned home to marry my mum in 1926 otherwise I would not be here today to tell his story! It must have been the humour of spiritual strength that kept him sane.”