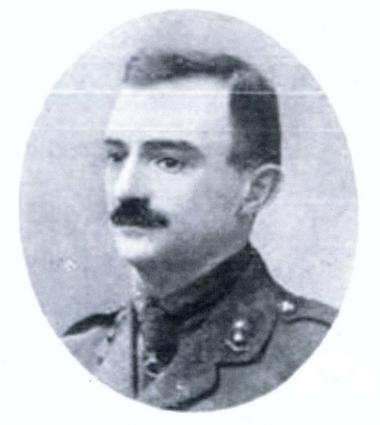 Percy’s family moved from Mile End to Wanstead and by 1911 were living at Grove Cottage, George Lane. This was a two-storey, 17th century, timber-framed house which stood on the corner of George Lane (now Nutter Lane) and Leicester Road.

Percy’s family were active members of Wanstead Congregational Church. His father, Hugh, an architect and surveyor, was an Alderman for Stepney Borough Council and was Mayor twice.

Hugh was patriotic and was involved in many recruiting drives for the army during the First World War. At one such recruitment drive in September 1915, 150 men signed up for duty but only 15 were considered fit for service. Malnourishment, disease and poverty in the East End had stunted the local men’s growth and taken a heavy toll on their health and fitness.

After attending Bancroft’s School in Woodford Green, where he excelled at athletics, Percy followed the career path of his older brother Herbert, becoming an apprentice civil engineer.

However, with the war continuing, Percy enlisted into the Royal Army Medical Corps on 20th May 1915. After training, Percy was appointed as a Second Lieutenant, Royal Engineers in October1916 and landed in France on 2nd January 1917.

Royal Engineers were required to repair everything from weapons to wells but they were also expected to fight if need be. In 1917, Percy’s company took part in in the pursuit of the German retreat to the Hindenburg Line.

In April 1918, the Germans launched a series of massive counteroffensives. The British were forced to withdraw to a defensive line near Ypres, Belgium. Percy was gravely wounded during the battle and died of his wounds on 12th April 1918. He was 27 years old.

Letters sent by his commanding officers to his father were reprinted in the Woodford Times newspaper of 16th August 1918:

From the Officer Commanding the 200th Field Company:

“I should like to tell you how much his loss meant to us all. He was a man who was utterly inflexible in his devotion to duty. He hated all thought of war, and while he shrank from taking another man’s life he was never backward in risking his own. He was absolutely devoted to his men, and I think that every man in his section was as devoted to him as he was to them. He will always live in my mind as an example of a man who had absolutely the courage of his convictions, and was afraid of no man except his own conscience.”

For more information on this individual please see The Old Bancroftian website.