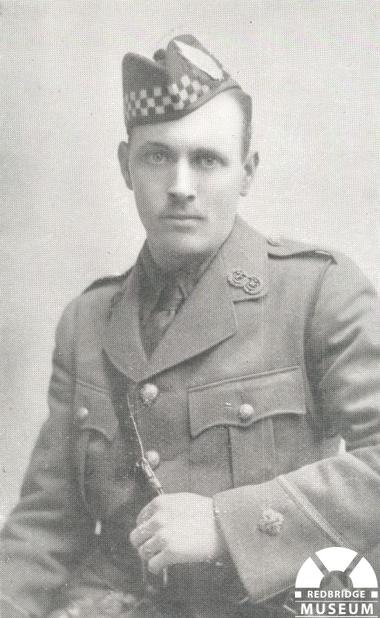 James C. Cockburn was born in 1890 to James and Margaret Cockburn. He was the oldest son, and second of six children. James, his father and younger brother Ninian were all working as shipping clerks in 1911. According to the 1911 census, the family was living at 71 Woodlands Road, Ilford.

James had served for five years in the London Scottish Territorial Regiment, but had resigned. Upon the outbreak of war, he voluntarily rejoined and went out to France with the London Scottish in September 1914. He took part in the fighting at Messines at the end of October 1914; a few days later he was wounded in the shoulder by shrapnel.

After recovery in hospital in Glasgow, followed by a period of convalescence, James obtained a commission as Second Lieutenant in the Argyll and Sutherland Highlanders. He continued training in Scotland until the early part of 1915, when he transferred, joining the Machine Gun Corps. He was ordered to France for the Somme Offensive, and until 9th October 1916 wrote cheerful letters home about victories being gained and his wish to be home for Christmas, which were reprinted in the Ilford Recorder on 27th October 1916.

However, on the 12th October 1916 James was killed in action. His body was not found and so his name is recorded on the Thiepval Memorial, France. His commanding Lieutenant wrote a letter to his parents informing them of their son’s death, which was reprinted in the Ilford Recorder, 27th October 1916: ‘…I think his outstanding characteristic was unselfishness, and regard for others. I have seen him give up his ets to the men, bind up their minor cuts and bruises, and on the very day of his death he was busy tending the wounded. I can tell you that he was killed instantly by a bullet and suffered no pain whatever. Our brigade was advancing, and Jim had gone “over the top” to reconnoiter before our guns went over. He refused to risk his men before he made sure it was worth it. The men were deeply attached to him, and feel his loss keenly.’

The Cockburn family suffered further bereavement when another son, Ninian, was killed in action in Belgium on 31st July 1917. Like his brother’s, Ninian’s body was also never found.

James Cockburn was part of the first cohort to join the school, in July 1901. His date of birth was 29th March 1890 and so he entered the Park Higher Elementary School as an eleven year old. Previously, he had attended Cleveland Road School, Ilford. James is recorded on the first Roll of Honour (in the Christmas 1914 Chronicles magazine). It gives his rank and regiment as ‘Corporal, London Scottish.’