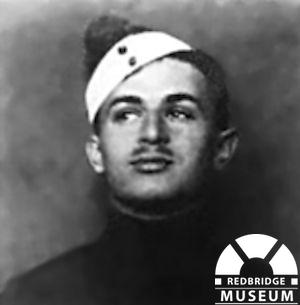 A Jewish gravestone in a Church of England graveyard is one of Redbridge’s most unusual war memorials. Although individual family gravestones are not featured on the Redbridge and the First World War website, an exception has been made for Harold Jassby.

Harold ‘Harry’ Jassby was born in Montreal, Canada into a large Jewish family of ten children in 1898. His parents and older siblings had originally come from what is now Moldova in Eastern Europe, then part of the Russian Empire.

In 1917, aged 19, Harry was studying at McGill University to become a pharmacist like his older brother. According to his family, Harry knew he would be drafted in Canada as a foot soldier and his dream was to be a pilot. As Canada did not have an air force, Harry travelled to Britain to join the Royal Flying Corps in October 1917.

Although there is no evidence, a family story states that Harry was among a group of men who had been asked to fly in a V-formation over London to celebrate the end of the war. A local historian, John Barfoot states that Harry was flying a Camel E142 when the plane above his lost its motor and collided with Jassby, causing a crash, although the source of this information is unknown.

Harry Jassby died seven months after landing in England on 6th November 1918, just five days before the Armistice. Harry was buried at St Peter’s Church in Aldborough Hatch, close to the Fairlop Aerodrome. He was the last fatal wartime causality of 54 Training Depot Squadron at Fairlop Aerodrome.

Unfortunately, his death is shrouded in mystery because the inquest was not recorded in the local press. After enquiries by local historian David Martin in 2015, the current Coroner for Redbridge contacted the London Metropolitan Archives, where Coroner’s Inquest records are kept but it appears these documents are no longer in existence.

Harry Jassby’s grave is on the left inside the front gate at St Peter’s. According to his family, Jassby lied about his age as his grave indicates that he was 22, when in fact he was just 20 years old.

Harry’s neice, Caroline Steinman writes: “I remember my late mother telling me that when World War 1 ended, the streets of Montreal were filled with happiness, people singing and dancing, celebrating the end of the war. My grandmother’s home was in mourning, the family sitting Shiva, the Jewish seven day mourning period for a family member. Just two months prior to the war ending, my Grandfather passed away.”

The Star of David together with the insignia of the Royal Air Force appears on his tombstone with the inscription: ‘In life he flew the azure sky, in death he flew to heaven high.’ The grave is maintained by the local Jewish community, who visit it regularly and follow the tradition of placing a pebble or stone on top of the gravestone to signify that someone has honoured the deceased person’s memory with a visit. Harry was also remembered on the centenary of his death on 6th November 2018 by a graveside memorial service organised by David Martin of the Fairlop Heritage Group and the Vicar of St. Peter’s Rev. Kate Lovesay.

Research by Carolyn Steinman (Harry Jassby’s niece) with thanks to David Martin of Fairlop Heritage Group and Ron Jeffries, author of ‘Aldborough Hatch, The Village in the Suburbs, A History’