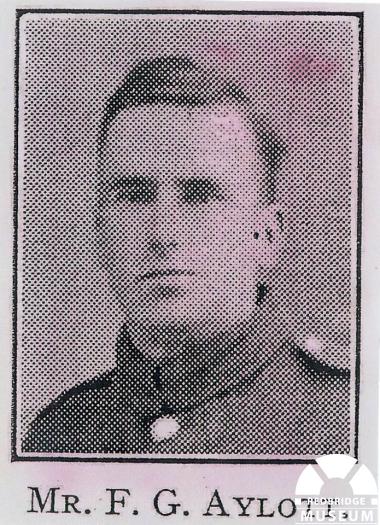 Frederick George Aylott was born on 16th January 1896. Frederick grew up in Wanstead, living first at 5 East Road, New Wanstead before the family moved to 49 Cowley Road. Frederick’s father, John, was born in Hertfordshire while his mother, Harriet, came from Plaistow, in what was then Essex and is now East London. John worked first as an agricultural labourer and then as a labourer repairing drains for Wanstead Urban District Council.

By May 1910, Frederick, aged fifteen years old, was employed by the Great Eastern Railway. He started work as a parcels van lad at Snaresbrook Station. He helped load and unload parcels from the trains onto a horse-drawn van for delivery to and from local businesses and homes in the Wanstead area.

Frederick later worked as a gate supervisor at Leytonstone Station, and a porter at Stratford and then Forest Gate station. In January 1916, Frederick followed his brother into the army and enlisted into the 2nd/10th (County of London) Battalion of the London Regiment (Hackney). Frederick’s elder brother, Thomas, had volunteered for the army on 3rd July 1914, just a month before war was declared.

On 25th January1917, after training, Private Frederick Aylott and his battalion landed in France. The battalion was engaged in various actions on the Western Front in France.

By summer 1918, the tide of war was turning and the Allies were rapidly pushing the Germans back. However, these attacks were dangerous and bloody as soldiers left had to leave the shelter offered by trenches. On 24th August 1918, during the Second Battle of Bapaume, Frederick was killed in action, aged 22 years old.

Frederick’s brother, Thomas, served in the Army Service Corps throughout the war but died of tuberculosis in July 1920, aged only 28.