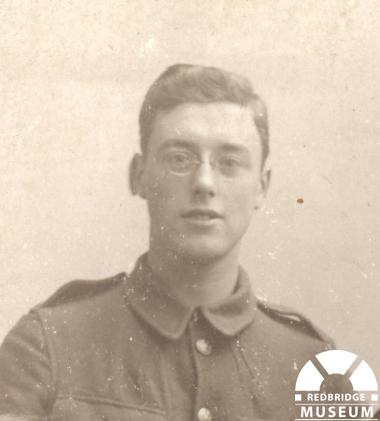 Dennis Alfred O’Donoghue was born in 1893 to Charles Dennis O’Donoghue and his wife Elizabeth. Charles and Elizabeth moved to Ilford from Cornwall in the late 1880s, when Charles left his teaching position at the ‘Merry Meet’ National School. He then found work as a teacher for the London County Council.

Dennis, who was known by his family as Fred, was the middle child of the three O’Donoghue children. His sister and brother, Gertrude and Reggie, were born in 1892 and 1896 respectively. In 1911, the census records the family as living at 85 St. Albans Road, Ilford.

The three O’Donoghue children attended Downshall School, which opened in 1899 on Meads Lane and Aldborough Road, very near the O’Donoghue home. The boys continued their studies at the Ilford County High School.

At the outbreak of war, Dennis and his brother enlisted with the 1st/28th Battalion, London Regiment (Artists Rifles). This regiment attracted many middle-class men who often went on to train as officers. Both Dennis and Reggie became Lance Corporals.

Dennis was reported missing in action on 30th October 1917 at the Battle of Passchendaele. A letter from his commanding officer was sent to his parents, and later published in the Ilford Recorder on 16th November 1917: ‘It is with the deepest regret that I have to inform you that your son Reg was killed in action on the 30th October; also that his brother Dennis is missing after the same action, and I fear there is little help.’ He was later recorded as having been killed during the battle.

The brothers belonged to South Park Swimming Club. The swimming club created a trophy in memory of the men of the club who lost their lives during the war. Dennis’ name appears on the cup, along with his brother and seven other men.