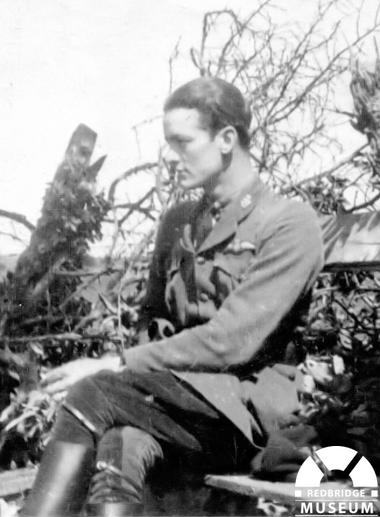 Albert Ernest Parks was born in Clapham, Surrey, on 18th November 1897. By 1911, Albert’s family had moved from West Ham to 52 Redbridge Lane, Wanstead. At this time, the family were able to afford to employ a domestic servant, called Minnie Bush. Albert’s father was a Commercial Traveller selling art needlework.

In November 1913, 16 year old Albert was working as a Warehouseman in Paternoster Square, City of London. Albert joined the Royal Flying Corps in 1915. He became an instructor training flight crew to use the Lewis machine gun and was promoted to Second Lieutenant.

Throughout most of 1917, Albert was declared unfit for service but was flying again by January 1918. He became a flying instructor at Upwood Aerodrome near Huntingdon, Cambridgeshire.

On 3rd June 1918, Albert married Violet, a milliner’s assistant from Leytonstone. They were both aged 21 and only married three months when Albert was killed in a tragic flying accident on 7th September 1918.

“…which developed into a spinning nose dive, thus causing the machine to crash to the ground killing both occupants.”

Of the 14,000 airmen killed in the war, well over half lost their lives in training. It was often the talented individuals that were selected to become instructors.

On 7th September 2014, a new memorial to Albert Parks and Adam Thompson was unveiled at RAF Upwood by members of the families.