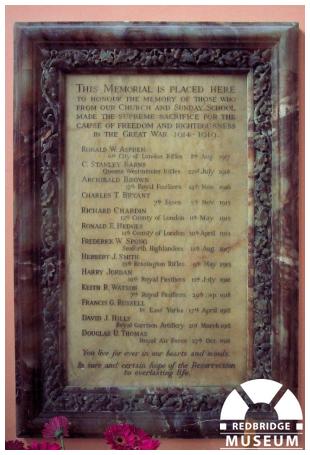 A stone tablet at Woodford Methodist Church, Woodford, commemorates 13 men of the church and Sunday school who died in the First World War. The memorial takes the form of a pale marble tablet, set within a brown marble frame decorated with carved oak leaves. It features the names of those who died, their regiment, and the date of their death. The tablet is displayed to the left of the church altar, next to the Woodford Wesleyan Church Roll of Honour. It was unveiled in 1920.

The plaque used to be located in the Memorial Institute Hut, an army surplus building, which was erected in the church grounds in 1921. The hut was used by younger members as a centre for recreation and meetings but when it was removed, the plaque was moved inside the church.

The foundation stone of the Woodford Wesleyan church was laid on 15th July 1876. The church was complete by the end of that year. The service for the official opening was on 9th January, 1877. The church later changed its named to Woodford Methodist Church in 1932.