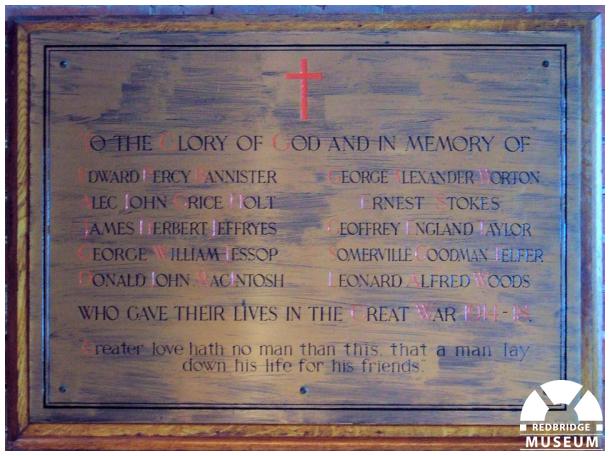 The Woodford Congregational Church memorial is displayed at Woodford Green United Free Church in Woodford Green. The memorial takes the form of a brass plaque mounted on an oak base and commemorates ten men of the congregation who died during the First World War. A red cross is featured at the top of the plaque and an epitaph at the bottom. The names of those who died are presented in two columns with the first letter of each name depicted in red.

According to a history of the church, written by R.L Galey, a Roll of Honour of service men connected with the church was placed in the Church porch during the war, although the format and present location of this Roll of Honour is unknown:

‘ [A] Roll of Honour of serving members was places in the church porch and J.C Crowther, leader of the Young Men’s Bible Class, corresponded with all the men overseas and organised parcels for them from the ladies of the church until the war was over.’

The History of the Woodford Green United Free Church by R.L. Galey.