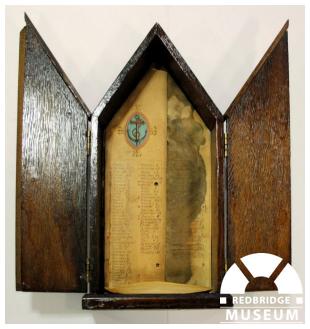 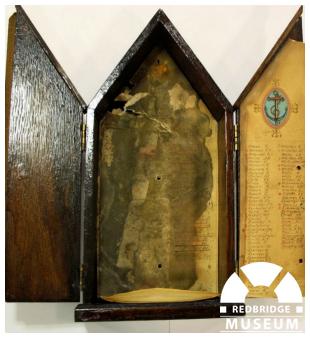 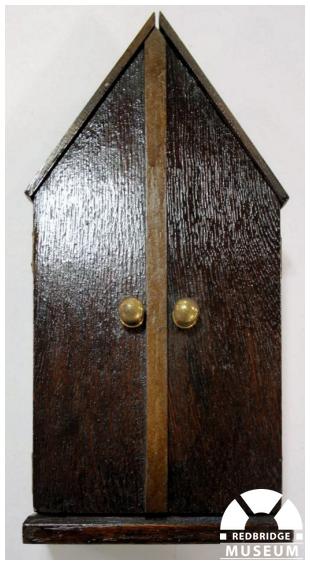 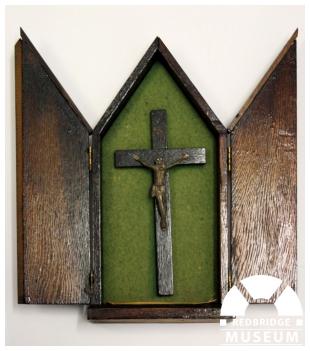 A wooden shrine most likely commemorating parishioners and members of the Young Men's Guild of St. Clement's Church who served in First World War, is now in the collection at Redbridge Museum.

It is thought that it was this shrine that was placed in the club room of the St. Clement’s Young Men’s Guild in 1918, and that young members of the bible class would gather each Armistice Day to lay a wreath on the triptych in memory of the fallen.

The wooden shrine, in the form of a triptych, features two doors with brass door knobs which open to reveal a wooden crucifix with a metal figurine of Jesus Christ.

The doors of the original triptych were originally inscribed with the 149 Guild members on active service. A printed label at the bottom of the shrine states that the shrine was ‘Refurbished following its recovery on the occasion of church reconstruction in 1978’ and that the ‘remnant of the name-list which decorated the inside of the shrine’ was placed in the ‘rear panel behind the crucifix.’

Unfortunately, the list appears to have sustained water damage; many of the names are illegible and the list of names which would have covered the left hand door was never recovered. Of the names which are legible, those who were killed in the war are indicated by the symbol of a cross.