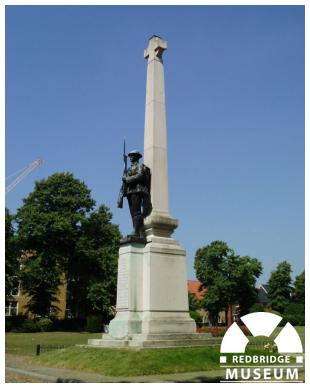 The Ilford War Memorial, set in its own gardens in Newbury Park, was unveiled on 11 November 1922.

This was joined on 25 June 1927 by a Memorial Hall listing 1,159 names of Ilford men killed in action. The Hall was built as the entrance to a new children’s wing of the nearby Ilford Emergency Hospital (later part of the King George Hospital). The children’s hospital was itself part of the scheme, since as well as a memorial to the dead it was also a symbol of new life.

As the historian Mark Connelly has shown in his excellent study of war memorials in east London, there was lively debate about the creation of this site. The Ilford War Memorial Committee was formed in November 1918 by the chairman of Ilford Urban District Council and a host of the town’s worthies including three bank managers, a company director, a schoolmaster, a representative of the Ilford Emergency Hospital and so on. In some ways, the strangest member was Reverend H. Dunnico, a Baptist minister and committed pacifist who had attended anti-war demonstrations throughout the war.

Unusually, a sum of £20,000 was to be raised without any idea of what it would be spent on. There was much discussion between the merits of a scheme with a practical use, such as housing for ex-servicemen or a boys’ institute and that of a purely aesthetic memorial. Ilford Council’s favoured scheme of a children’s hospital and a monument gradually won out and land was purchased by the War Memorial Committee at Hatch Lane, Newbury Park, next to the Ilford Emergency Hospital.

This location was also contested. For many, ‘the plot largely used as a cabbage ground’ was neither a fitting or dignified place, nor in the civic heart of the town. The Committee explained that the building of a new arterial road – the A12 Eastern Avenue – on Hatch Lane would turn the site into the main civic thoroughfare. A war memorial which would tell future generations of the bravery of the men of Ilford had to be in the prospective heart of the town, not its old centre.

Fund-raising proved to be a challenge. Reliant on public donations, six editions of a magazine called the Ilford War Memorial Gazette were produced for sale between 1920 and 1922 which featured potted histories of the war, donation lists, biographies and photographs of ‘the fallen’, appeals for information, details of the fund-raising and a roll of honour of those that had died. The Gazette appears to be unique to Ilford for no other organisation in Britain appears to have had a publication devoted to a war memorial fund.

People now started to discuss who would pay for the upkeep of the children’s hospital if and when it was ever built. Councillors and the public appeared anxious to ensure that Council ratepayers wouldn’t pick up the bill so the Committee was forced to amalgamate their scheme with the plans of the Emergency Hospital and the result was a scaled-down project in the form of a war memorial children’s wing. The monument, meanwhile, was that of the figure of a soldier by the sculptor Newbury Trent.

When the King George Hospital was demolished in 1992 and relocated to its current site on Barley Lane, the Memorial Hall was kept in situ and now forms part of the War Memorial Gardens.