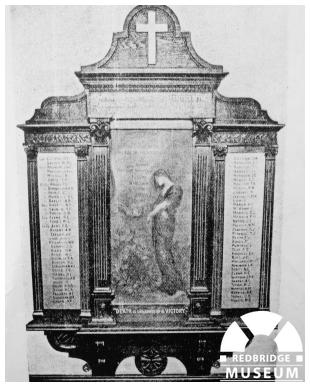 Apart from the main marble memorial which stood in the chancel, a three panelled oak memorial hung on the wall of the lobby of Ilford Congregational Church (later renamed The Vine Congregational Church). The centre panel featured an image of a grieving woman standing over a laurel wreath, either side of which were inscribed the names of seventy two congregants and members of the ‘Ilford Men’s Meeting’ group who lost their lives. The names appear to match those inscribed on the main marble war memorial which was situated in the chancel.

The church closed in 1959 and was subsequently demolished but services continued to be held in the adjoining hall. However, the oak panelled memorial was sadly lost around this time.

A copy of a photo of the memorial in situ is reproduced here but the inscription is difficult to decipher.