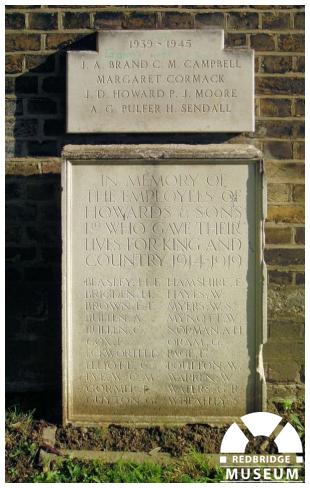 A stone tablet at Barkingside Cemetery commemorates 22 employees of Howards and Sons Ltd., who died during the First World War.

Howards and Sons, established in 1898, was known as the ‘City of Chemicals’. Its 30 acre site just off Ilford Lane included workshops, warehouses, laboratories, and a huge chimney which became a local landmark.

Howards manufactured a wide range of chemicals that were vital to the war effort. The most important products they made were medicines, including ether (used as an anaesthetic), aspirin (a pain-killer) and quinine which was developed as a cure for malaria and taken by troops when serving in the Middle-East and India. So important was quinine that the government requisitioned all supplies.

Howards’ Managing Director became the Chairman of the Association of Quinine Manufacturers in Allied Countries and the company entered into an agreement with the Indian government in 1918 to ensure future supplies of cinchona bark, from which quinine was made. The company finally closed in 1980 and the site redeveloped for housing.

The memorial was previously fixed to the west wall of the Ilford Cemetery Chapel in Buckingham Road but when the chapel was demolished in 2011, it was re-sited in Barkingside Cemetery.

Another stone tablet, positioned above, is dedicated to those of the company who lost their lives in the Second World War.