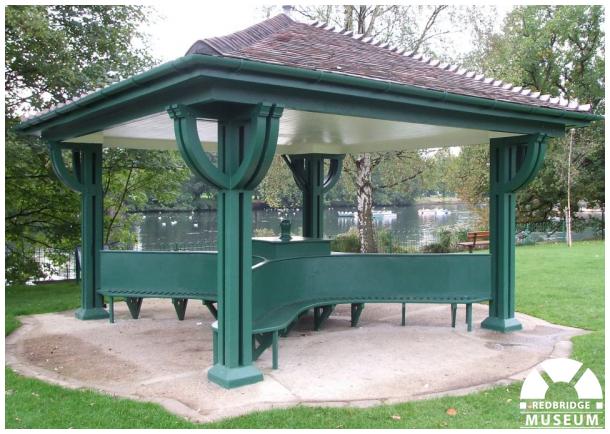 Horace Cowlin is commemorated at Valentines Park in Ilford with a memorial in the form of a four-sided wooden shelter, accompanied by a stone memorial tablet.

Horace Cowlin was the proprietor of a jewellery shop in Ilford High Road. He served with the London Rifle Brigade, first arriving in France in June 1915. He was killed on the first day of the battle of the Somme, 1st July 1916, whilst saving the lives of his fellow comrades. His story was published just weeks later, in the Ilford Guardian and Ilford Recorder, where it was revealed that Horace ‘was in the act of throwing a bomb at the Germans when he was shot in the wrist and dropped the bomb, thus setting the fuse going… ’ With only a few seconds before the grenade exploded, Horace threw himself upon the grenade, thereby shielding his fellow comrades from the explosion.

In August 1916, Horace’s fellow members of the Ilford Chamber of Commerce met to discuss proposals to erect a memorial in his honour. It was decided that a wooden shelter, something both ornamental and useful, would be gifted to Ilford Council. This shelter and a stone memorial plaque, unveiled on 6 December 1917, can still be found in Valentines Park.

Horace’s name is also featured at the Ilford War Memorial Hall where it is followed by the letters V.C. This is because up to the time that the memorial was completed, it was hoped that the award would eventually be announced. Unfortunately, this was never to materialise as actions meriting the award of the Victoria Cross had to be corroborated by an officer and none were present at the time to witness Horace’s heroic deed.

In 2006, the memorial was refurbished and the original commemorative plaque was cleaned, re-gilded and re-sited between the shelter and the lake.

Based on research by Redbridge Museum, with thanks to Frances Speakman.

In July 2016, the memorial shelter and stone tablet were restored by Vision Redbridge Culture & Leisure, with funding from the London Borough of Redbridge, to commemorate the centenary of both Horace’s death and the Battle of the Somme.