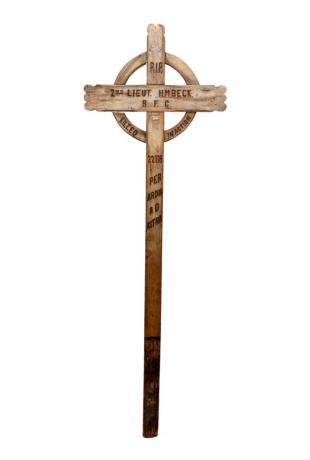 When a permanent gravestone was installed, the War Graves Commission offered the cross to Lieutenant Beck's parents who brought it back to England.

In February 1992, it was found lying in Eastern Avenue by a night duty police officer. Fellow policeman, P.C. Jim Mitchell, took an interest in the cross and after making some enquiries, it was concluded that the memorial may have been gifted to St. Clement’s Church by Herbert’s parents; becoming lost when the old church premises were demolished in 1977. It was subsequently ‘rededicated’ in November 1992 at the new St. Clement’s Church in Cecil Road.

Several weeks after the rededication ceremony, P.C. Mitchell was driving past the house that had belonged to Herbert Beck’s parents in Mayfair Avenue, when he noticed that the house was in the process of being refurbished. It is therefore possible that the cross had probably always been stored in the Beck household and was likely thrown into a skip by the builders, falling off the lorry as it travelled down Eastern Avenue.

In 2002, St. Clement’s closed and the cross was subsequently donated to Redbridge Museum.