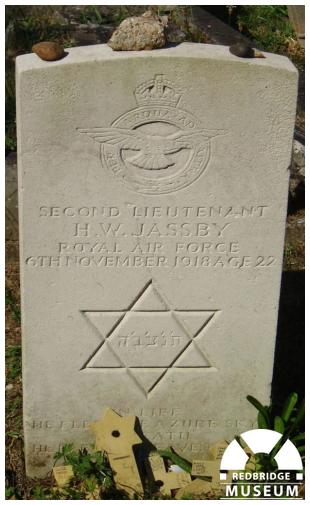 A Jewish gravestone in a Church of England graveyard is one of Redbridge’s most unusual war memorials. Although individual family gravestones are not featured on the Redbridge and the First World War website, an exception has been made for Harold Jassby.

Harry Jassby’s grave is on the left inside the front gate at St Peter’s. According to his family, Jassby lied about his age as his grave indicates that he was 22, when in fact he was just 20 years old.

The Star of David together with the insignia of the Royal Air Force appears on his tombstone with the inscription: ‘In life he flew the azure sky, in death he flew to heaven high.’ The grave is maintained by the local Jewish community, who visit it regularly and follow the tradition of placing a pebble or stone on top of the gravestone to signify that someone has honoured the deceased person’s memory with a visit. Harry was also remembered on the centenary of his death on 6th November 2018 by a graveside memorial service organised by David Martin of the Fairlop Heritage Group and the Vicar of St. Peter’s Rev. Kate Lovesay.

Research by Carolyn Steinman (Harry Jassby’s niece) with thanks to David Martin of Fairlop Heritage Group and Ron Jeffries, author of ‘Aldborough Hatch, The Village in the Suburbs, A History’